Barunei Hill is one of the famous picnic spot in Odisha and this place is also one of the major tourist spot of Odisha. Every year thousands of tourist come here to its beauty. The major attraction of Barunei Hill is Goddess Barunei.  The Barunei Temple is located at about 150 ft high of the Barunei hill which is very near to Khordha of Odisha. The deities of the Barunei Temple are Goddess Barunei and Goddess Karunei. For identity between the two names the temple is known as Barunei temple. 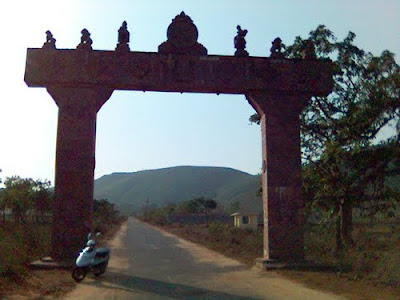 Many people knew Goddess Barrunei as Goddess Arunei. The two idols of the two deity of this temple is made of Black granite stone (Kalamuguni Pathar). The left side is Goddess Barrunei and Right side is Goddess Karunei. The height of each idol is about 18 inch. The two idols are wearing battle dresses. There is a story behind this. In Kanchi Battle God Jagannath and Balabhadra helped King Purusottam for winning the battle. It is belived that the two deity or Goddess killed many English soldiers at that time. After that the English soliers know about that and planned how to decrease the energy of the Goddess and also did that successfully. After that the King defeated.
History of Barunei Hill of Odisha
There are also some other tourist spots present on the Barunei Hill such as Pandaba Cave, Pandab Guha, Pandabahara etc. It is believed that God Ramachandra lived here some days at the time of his Unknown living. The stone on which God Ram Chandra was lived is known as Shree Ram Stone (Shree Ram Pathar). One day after cooking Goddess Sita washing the pots and told “till the earth is there the water of this place will not dry”. And it is true that even in summer days the water of this place will not dry.
Geographic Statistics of Barunei Hill of Odisha
The length  of the Barunei hill is about 7km and breadth is about 800m. There are about 88 steps you have to cross to go to the Barunei and Karunei temple.The height of this hill is about 304.8m and about 150m above the ground level the Barunei temple is situated.
There is also a Guest House is there. In Raja Festival there is a very big festival is celebrated at this place.